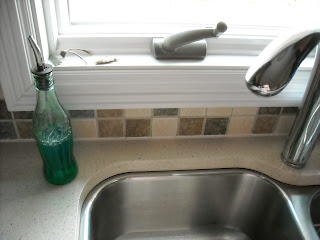 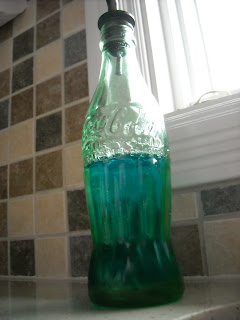 When all those decorative bottles filled with flavored oils became ubiquitous in the retail shops, I got the idea to use a similar dispenser for dish washing liquid, so I could leave the soap out all the time rather than stashing it under the sink.
I found the little spout at a kitchen shop and Hubby carved the rubber stopper part down a bit to fit the opening of an old CocaCola bottle we had on hand. The chrome spout originally had a little metal ring around it that corroded--I thought it looked great on the antique bottle, but evidently Hubby thought it just looked corroded, 'cause he tore that part off one day before I could stop him.
Incidentally, on the windowsill are a couple of arrowheads found by Hubby in his childhood and a chicken wishbone that Hubby recently gleaned. Gonna have to remind him to break that one day with one of the grandkids, so I can stop looking at it!
Until he saved this one, I had forgotten all about breaking wishbones for luck...do people still do that? Well, anyway, best of luck on all your last minute holiday shopping!!
Posted by Dmarie at 9:37 AM

Love the idea! Next time I have a glass bottle I want to reuse, I'll have to go in search of a spout :)

What a great idea. Plus instead of spending money on an entire new fancy bottle for dish soap, you only had to pay for the spout part.

I use a blue bottle I found in a trash pile for my dish washing soap, with the same kind of pour spout you are using -- I think bartenders use this to pour. It's much easier on the eyes than the original plastic bottle. Good idea.

I've done this before, and I loved it! Great blog by the way! Reusing items helps to green the earth, and I'm happy you are writing about it to share it with the world. So many times I get those funny looks from people when I reuse my things, but I think it's creative and I love that you have created a community for those who reuse! Wow!

I LOVE this, how creative and fun :-)

What a great idea, and here in Spain it is easy to get the spouts, they are sold in all the hardware stores as olive oil pourer's

What a great idea. I even have the old Coke bottle. I have the oil dispenser but have never seen just the spout but will be looking for a used one. Thanks.

Awesome! Reusing at its finest. I hope you had a great and happy New Year!

Love this idea! I used to live in Atlanta where Coke is King! Would make a cute housewarming gift.