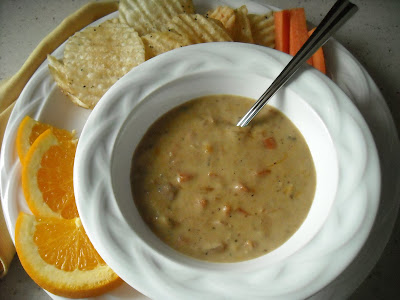 Let's talk about NEVER wasting food -- instead of hating leftovers, many of us RE-PURPOSE them instead!
When feeding people that I don't see too often, I try to offer more than one thing, hoping to suit their tastes. Of course, that leaves me with leftovers, and I can only eat so many leftover tuna salad sandwiches! 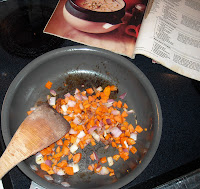 That's why I turned my leftover tuna salad (tuna, mayo, celery, capers, salt & pepper) into tuna cheese chowder. Cooked up some chopped onion & carrot sticks (too lazy to shred these, but a small dice cooks quickly enough). Stirred in a little flour then added some broth & milk and let the mixture thicken a bit before tossing it into the slow cooker with the seasonings below. About an hour before lunch, I stirred in the tuna salad; then stirred in some cheese about half an hour before eating. The slight crunch of the celery didn't affect the chowder a bit. I thought it tasted every bit as good as when I make it from scratch, as in the recipe below. 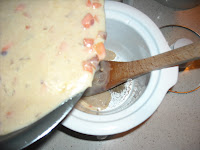 I love changing leftovers into something new, don't you? Just found out Real Life Living has an idea for leftover French fries that I had never considered. Any leftover transformations you'd like to share?

Thanks for stopping by my blog and thanks for the link-back. :)

This chowder looks yummy. My 7yo loves anything with tuna in it, so this will be one we'll try soon!

Though I've never been a fan of tuna I am a HUGE fan of re-purposing leftovers! I get a kick out of making something totally different out of it and the not wasting food is the sweetest cherry on top.

Way to go you clever chef!

@Annie, really enjoyed your blog...so glad to have found it!
@BLD, I get a kick out of transforming leftovers too...it's like alchemy! ;)