Seitan: What was I thinking?! 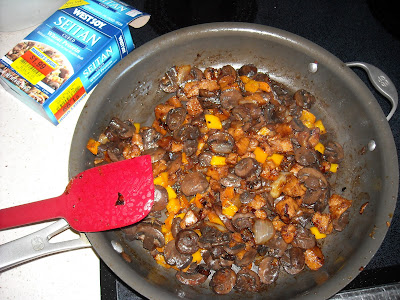 Okay, I guess I forgot everything I learned from Michael Pollan about eating only what our great-grandmas would recognize as food. Whether from curiosity or the siren call of a bargain buy, I bought SEITAN, that vegetarian meat substitute. 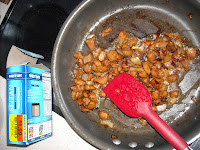 Hubby right off sent up a mutiny flag and refused to even try it. Well, Pollan and Hubby got it right, 'cause that stuff is pure MEH!
To be fair, I also find chicken and beef to be pretty dull once the first couple of chews have worn off the seasoning. Unless I swallow my food whole, by the time meat or poultry is all chewed up, there's a whole mouthful of BLAH going on. I've been a bit of a flexitarian since I was a kid for that very reason. I only eat about a half to a quarter of a serving of animal protein 'cause I get awfully bored with chewing the stuff.
That boredom goes triple for this seitan stuff. NEVER again!!
I will keep trying to add more veggie entrees to our rotation though. Actually, I was so tickled as I was cooking the seitan because I thought it looked great as I sautéed it with onions and garlic before adding the mushrooms, peppers and eventually noodles too. If I had to, I could probably even get used to eating seitan, but I don't have to, do I?!
Don't think I'll be throwing the leftovers away though. I'll be eating and regretting this stuff for a couple of more days now. Any regrets being served over at your place??
Posted by Dmarie at 1:28 PM

I've been adding TVP to our meals that call for ground beef, lately. I use 1/3 ground beef, 1/3 sausage and 1/3 TVP. We get our beef and pork from our neighbor at wholesale prices (very good) or sometimes in trade so I don't NEED to be very frugal with meat...I just think it's the smart thing to do. I GOOGLED homemade TVP so according to Pollen, it's something my grandma could have made and consumed! :0 FYI: no one in my family knows I do this. I would have had a major MAN meltdown in this carnivore camp!

@Lynda, that cracks me up...understand completely and love that you do that!

LOL! My hubby is not happy with my current plan of using meat as a condiment, and upping our servings of fruits and veggies at meal time. He would die if I tried to serve Seitan! My current culinary flop have been Jerusalem Artichokes. They do not pass for potatoes, know matter how hard you try!!!

@TWM, *chuckle*, I have in mind to make some "mashed potatoes" out of cauliflower soon, but Hubby is usually okay with anything I do with REAL food. love it that you're using food as a condiment...Thomas Jefferson did too!!

Ugh I totally agree with you. I HATE meat substitutes, vegetables are so much better. I am sorry you have to eat leftovers. I really don't know how to make it taste good.

I totally have a recipe for mashed cauliflower but I am not sure how it would go over in our household :-/ If you make it I can't wait to hear how you like it.

Just found your blog and I love it! Froogs xxxx

eeewww!!LOL
my hubby throws that flag up often,even if the tomatoes are chunky.
but lets see,there was the gluten free bread that I tried because I liked the packaging,yes,i really did just own up to that!
I nearly needed a new set of teeth!!
cheerio

My hubby doesn't like new in the diet, so I try to sneak a few different things in once in awhile. I know I couldn't get away with adding seitan. You made me laugh though. Thanks for the warning.

I have never tried seitan, but you successfully encouraged me not to try it.

@Meg, I will!
@Frugal Queen, thx, love your blog too!
@lightening, made that mistake myself once...*cough, cough* that bread was dry enough to choke a horse!
@Tiffanee, pretty much anything goes around here...except Hubby will cook a meat-centered meal himself if I've been serving too many vegetarian ones! At lunch yesterday, he grilled marinated venison steaks.
@Practical, if I can save only one... ;)

I have made it and bought it (both long ago), but I am just not much for it. I don't care for mock meats. I agree I'd just rather have the veggies, or beans if I am after vegetarian protein. That said, I seem to recall enjoying it a couple of times I made it. Still, not the best review.

The school where I work mixes TVP in with burger as a cost saving technique. They keep it a secret. I bet the football players would riot.

Beauty and The Green said...

So funny,seitan looks and sounds tragic. Thanks for the warning. Thanks for visiting my blog too, I love your blog! Awesome recipes. I am a happy follower and I bookmarked you too.