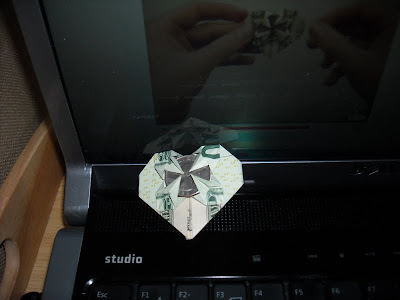 Okay, you might've noticed that crafts are not my thing; yet, when my baby brother razzed me for only cooking so far in my commitment to try something new for 30 days, he had a point.
Of course, his idea that I should make hand-crafted paper went way beyond my desirability zone, but thinking about paper led me to origami. So, there you have it, my first and only origami heart.
Yes, it was easy. No, I didn't enjoy making it. BUT now that it's made, I do have some sense of satisfaction in having tried something new. There's something to be said for that, don'chaknow!

Haven't been home much lately, so there are some fairly wussy choices in my "do something new" daily challenge:
To make up for the utter forgetability of those something news, I asked the mumsy to teach me to knit a dishcloth. My frustration level with crafting is tempered here by the fact that I need more dishcloths!
Time to power down...I'll let these photos bring 'er home. Let me know if you can thing of something I might've never tried before that would be fun & worth trying. ????

How about baking for a neighbor? Or surprising a friend with dinner? How about a full day of time just for you? I'm ALL in favor of that idea. Would that count for a new experience?

How about learning to juggle? Make a scrubby out of a plastic bag? Hey, just tie it in loose knots, scrub, untie and put on the prongs on the top of the dishwasher--a new experience? Start things like the dishcloth to put away for a wedding gift basket of kitchen things you make? Make a Christmas gift? Don't be too hard on yourself with the knitted dish cloth--it goes in a sink of dirty dishes! Make something to enter in your country fair. Have you ever entered anything in the county fair?

I wish I were more clever at coming up with new things to try--all I can come up with is BIG things--like learn to paint, or draw, or play an instrument.
Love the idea of regular flatware in the vehicle....I despise (!!!) plastic cutlery. Have you ever gotten one of those "sporks"? The worst!

I think you have done just beautifully. If you haven't go to the mirror and tell yourself, "I love you Dmarie. You are so great." It is hard sometimes especially if you have never done it before. I like to do it - I also like the little irksome look I get on my face when I'm really trying to believe myself. Eventually it happens though. Take care, enjoy all the firsts. Love Katie x

great you HAVE the time to try something new;)..I wish I had a little more time! I´m sure you´ll find YOURS, or you already found it:)(?) knitted dishclothes sounds good...curious to see them finished!
JenMuna

This reminds me of coming home from Texas while I was in college. A professor sat by me on a plane and when I made an origami swan out of a napkin he asked for a dollar bill. I didn't have one so he pulled one from his wallet and made me a ring that had GW's face for the stone. He gave it to me and told me to always keep it and I'd never be broke! I still have it...somewhere.

I like your origami heart! (I also liked reading Mary's origami experience too).

Salty caramel ... I've never come across that flavour - not sure what it'd be like. Sounds like you thought it was good!

Great idea putting some eating utensils to carry around in the car. I should do the same.

How about.. write a letter to someone you've lost touch with. Paint your fingernails in a wild colour. (It's hard to suggest things when I don't really know you... ha ha, you might already go around with Flaming Fuschia on your nails!). Learn to meditate. Collage pictures on to a nice shaped box to be used as a waste paper basket - or something. Have fun!

Cool origami! That is something I've always thought I'd like to try, but never have.

I just learned to knit in July. It is getting easier and easier. I really want to make socks. I'm tired of buying socks that I can't darn when I inevitably wear out the toe.

Or do you ever write poetry?
Or crochet? I found it easier off the bat than knitting, though both have their pros and cons.
What about yoga?
Or volunteering at a shelter or soup kitchen or something?
Or hula hooping? Surprisingly easy and fun "exercise!"

Also, there are so many new things to try cooking wise I wouldn't blame you if that was all you did too!

@Barefeet, great ideas, but sadly, I'm old enough to have done them. not lately tho', so thx for reminder!!
@Practical & BLD, hmnnn, someone gifted me with some juggle balls but I never got the hang of it!
@Sue, ooh, the dreaded sporks!
@Obaitori, smiled just thinking of your suggestion!
@JenMuna, if you've no time, that must mean you're living a full, exciting life. jealous! ;)

@Mary, what a great story! I have a buckeye shaped like a heart that some old codger gave me one time. I didn't even know him but remember him still because of that simple gift!

@Susan, great ideas but again, old enough to have done them...well, except for the collage. gonna have to think on that... Oh, most of the time these days, I have NO polish on my nails. Occasionally clear. Did I mention that I'm lazy? ;)
@BLD, I have crocheted, which is why I don't find this knitting too frustrating. Old enough to have done the rest. Except JUGGLE! (had some wonderful experiences volunteering at a homeless shelter)

Learning to juggle is a goal of mine before I die. Hopefully, all my joints will cooperate and my timing will still be good.