Make do: Newspaper instead of paper towels 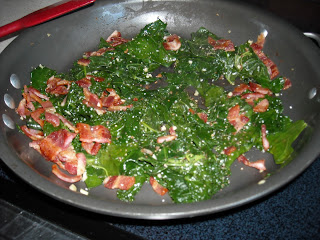 Cooked up a mess of kale and collard greens yesterday...perfect antidote to the rich foods of the day before. Even though it may not look like many greens, the skillet was heaped high with greens before they cooked down. 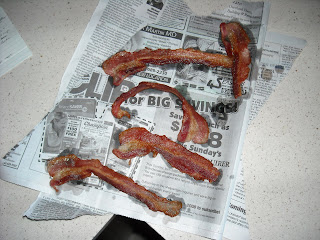 Wish I could remember which frugal blogger(s) keeps a supply of cut newspapers under the sink for cleaning up messes. Was it Frugal Hacks? Practical Parisomony? that gave me the idea to try newspaper instead of paper towels for draining bacon?
Used five layers here and there was even some grease on the bottom layer. Next time, I will use 1 paper towel on top (we use a brand that tears off in half sheets), but I'm pleased to not be using 3 paper towels. May seem trivial as far as savings go, but buying one-time use products is NOT a good use of my money.
We do take the newspaper, but for those who don't have papers lying around, clean rags work well. Tried this myself, but our front load washer doesn't clean the grease out of rags as well as I'd wish. I've also placed napkins accumulated from take-out foods under a clean paper towel, but we don't eat fast food often, so we don't collect many paper napkins.
I do save paper towels that have been used to clean up condensate or other non-food substances. Once dried, I save them in a drawer and have used them to soak up bacon grease, with a clean paper towel on top, directly under the bacon. I could live without meat, I think, but I'd sure miss bacon!
Kale with Garlic and Bacon
1 1/4 lbs. kale (2 bunches) --I used a mix of kale and collards, washed and stems removed
2 cloves garlic, minced
5 slices of crisp bacon, with largest sections of fat removed
1 cup water
Salt and freshly ground black pepper to taste
Cook the bacon in a large skillet until crisp & remove to drain. Drain off much of the grease from the skillet before sautéing garlic 30 seconds then adding the greens. Cook covered until greens are wilted as desired, 10-15 minutes. Sprinkle with bacon, kosher salt and black pepper. For more complete instructions, see the original recipe on The Other White Meat website.
Incidentally, according to Mayo Clinic, kale is a good source of calcium!
Posted by Dmarie at 7:57 AM

Email ThisBlogThis!Share to TwitterShare to FacebookShare to Pinterest
Labels: frugality, Make do

You've got some really great ideas on you blog! I use newspaper to soak up the extra oil from cookies, but never thought to use it for anything else!

I never thought to use them for cookies! ...only use wire racks...should I worry about extra oil in cookies? ha!