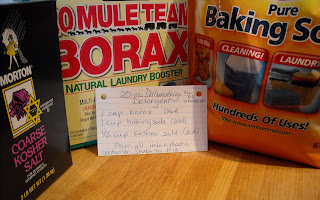 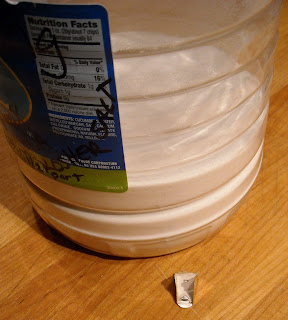 Because we cook and eat mostly at home, our dishwasher fills up at least once a day. As I write this, the salad spinner, a colander and the crock from the slow cooker are taking up considerable room in there.
There's an ongoing debate over which is more efficient, the dishwasher or hand-washing, but I turn off the dry cycle and like the fact that the dishwasher removes germs better and rinses more efficiently than I can.
(Incidentally, the little metal spout off the now empty salt box is pictured here because it will go into Hubby's scrap metal bin and eventually be recycled.)
Recently discovered the magazine All You at our public library that contained a recipe that I will be using every FIFTH load, as I've read elsewhere that homemade products sometimes result in filming. Still, saving money even only every fifth load counts, eh?
Dishwasher Detergent
1 cup borax
1 cup baking soda
1/2 cup kosher salt
Anyone else using homemade stuff? Getting good results?

I was just mulling over writing a similar post! Vinegar and baking soda work for me! When I run out of Palmolive, I use those together. But, I do use the vinegar last and have no filming problems.

great, I look forward to hearing what more you have to say on the subject on your blog, Practical!

Hello, so much good advice on your blog! I can sure make some us of it!
Thanks for commenting on my Friday Moment post,
xoxo

Does your salt come in plastic? I suppose that is salt in the plastic container next to the little metal spout. The post is up--nothing that contradicts your post. You will have to keep us posted on how the 20 Mule Team Borax works.

This is awesome! I have been thinking about making some kind of dishwasher detergent and your post has inspired me to ACTUALLY do it.

What a brilliant idea! Wonder if there's a natural way to scent it...

What a brilliant idea! Wonder if there's a natural way to scent it...

We did this before your post and were a bit disappointed. I love the idea, but our dishes just didn't come clean enough. We've ended up cutting regular detergent by 50% with baking soda. It works great, but it isn't as eco-friendly or as cheap as I would like.

Hi, thanks for stopping by my blog and saying hello.

Emily on the Southern Prairie said...

Yes! I have some sick love for Borax. We also really like soap nuts if you've tried those.

I have all these ingredients on hand - maybe I will have to try it!
We currently use an eco-friendly store bought detergent with vinegar in the rinse cycle. The vinegar works great!

thanks for stopping by, you guys. look forward to checking out your blogs.
@Practical, the big plastic jar, which formerly held pickles, now contains my detergent mix.
@Spicy, dunno about scent for this powder mix, though for homemade dishwashing liquids, something I've not yet tried, I've heard you can add essential oils.
@Jacob, the mix worked well yesterday on its debut run, so hopefully using it only every 5th time or so will continue to yield good results.

I use home made products a lot. Here is a post I did on mine if you're interested.
http://maasjournal2.blogspot.com/2010/11/homemade-cleaning-2.html

I scent my dishwashing detergent with orange oil bought from a health food store. Expensive but lasts for a long time as you only need a few drops.
If you would like to try my recipe I've placed it on my blog on the right hand sidebar. Maa.

I use both for hand-washing and in the dishwasher a mixture made of 50% ecological dishwashing detergent and 50% apple vinegar. and I am so satisfied with it, that I sometimes use it also to clean my stainless steel sink.

ps: vinegar is acid and baking soda is basic. if you use them together it seems they work, but they don't. they simply cancel each other's effect.

pps: to scent my self made detergent I use pure thyme essential oil. it smells good and has a strong antibacterial effect.

This is on my list of things to do but I havent made that leap yet. We make our own laundry detergent but I'm also wondering what recipes for the dishwasher work best! I hope you'll do another post to keep us in the loop! :)

I will certainly give this recipe a go. I have tried a few others but have never really been happy with the results. Thanks for sharing and thanks for visiting.

We have been making automatic dish soap for a long time now and love it. Our recipe is similar, but we add citric acid and we use essential oils to scent it. Vinegar in the rinse compartment help a ton with film on the dishes.

We've tried different variations of homemade dishwasher detergent alternatives, but never with good results. The water in our area is extremely hard, and I think that is the main problem. So for now we are using a 'green' commercial detergent and vinegar for a rinse. It has been frustrating not to be able to switch...